I'm very mad at the mommies.

Okay, so here's the deal. I like clay. Actually, I love it. I love to dig it, roll in it, eat it. So... mommy Cate got some bags of this black dirt called Potting Soil, and I dragged one around the yard and ripped it open while she was inside. It tasted great! Did she come out and thank me for rearranging? It was hard work pulling that bag. Did she say "Why Dief, I'm so happy you're enjoying yourself!"??? No. I got YELLED at. Hmmph.

So, she had a plant in the planter. She named it Rosemary. I ate it. It was yummy. It was good revenge. Guess what? I got fussed at. I hauled ass and ran with it. Mommy Cate was really mad now, and I was laughing my butt off with Rosemary in my mouth. But then she closed the gate and locked me out of the small yard! We have two fences, a chain link fence and a big privacy fence around the big yard. So she locked me out of the small yard with all the dirt and plants!

And she started using a noisy thing and cutting the pieces of wood she bought. I howled and yelled at her, but she LAUGHED.

Did you read that? She LAUGHED at ME, Princess Diefenbaker. Grrrrrrr.

So I got her back.

I'd stare at her, and say mean things. When she would look up, I would grab one of her plants that lives on the fence (a vine she says) and grab it and fight it off the fence. Ripped it right out of the ground. She laughed at me! So I kept doing it while staring into her eyes, making sure she knew WHY I was doing it. I pulled several vines off her fence and she STILL didn't let me in!

The mommies are also getting snippy when I tell them I want what they're eating. I've also been telling them I need to be on the couch. So now they're being mean and making me lay down and "behave" like a "nice girl."

I think I need a new home. Nobody should have to put up with mean mommies.

--Frustrated Dief
Posted by Diefenbaker at 12:11 AM 10 comments: 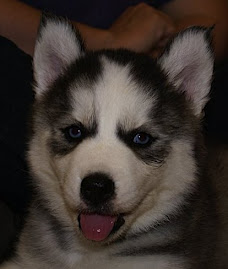